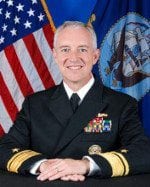 Our guest for the December call is Dr. David Titley, a professor of practice in meteorology at Pennsylvania State University and the founding director of their Center for Solutions to Weather and Climate Risk. He was also NOAA’s chief operating officer from 2012-2013. Before assuming these positions, he was a rear admiral and the chief oceanographer of the U.S. Navy, in which he served for 32 years.

While serving in the Pentagon, Dr. Titley initiated and led the US Navy’s Task Force on Climate Change.